You don’t usually think of sitting down for a meal as a death-defying adventure, even when your favorite home cook attempts a recipe way above their skill level. But some foods, even really common ones, are actually pretty dangerous if you prepare them incorrectly.

If you’re a fan of chili, you may have some dried kidney beans in your pantry. But if you don’t cook them enough, they can make you super sick.

Scientists aren’t sure exactly what lectins do in bean plants, but we know they’re important. We know a lot more about what PHA does to animal cells. For instance, it makes red blood cells clump together, so it’s been used in medical research to help separate the components of blood.

It also interacts with white blood cells and is used in immunology research. And if you eat PHA, it binds to the cells that line your gut and reduces their ability to digest and absorb food. This causes cramps, diarrhea, and vomiting.

The wild thing is you only have to eat 4 or 5 improperly cooked kidney beans to make you sick. Boiling kidney beans break down the PHA because heat can disrupt the bonds within the protein. And without that molecule, they’re safe to eat.

Since canned kidney beans are boiled during the canning process, you don’t need to worry about them. But if you’re cooking dried kidney beans, it’s recommended to soak, drain, and then boil them for at least 30 minutes. And you need to make sure they get hot enough, because sometimes slow cookers, which cook at lower temperatures, don’t do the trick. Humans like their carbs. Foods like rice, potatoes, and wheat are staples in many parts of the world. But in many tropical areas, cassava is king.

Cassava is a root vegetable, kind of like a carrot, and in many ways it’s a great crop. It’s very hardy, can grow in poor soils, and doesn’t need much water.

But cassava also contains chemicals called linamarin and lotaustralin. These chemicals seem to help protect the plant from herbivores and transport nitrogen, which is a crucial nutrient. But they’re also cyanogenic glycosides, which means that they’re converted into cyanide-containing compounds when digested.

And cyanide is bad news for your cells. It interferes with cellular respiration and prevents your cells from making ATP—the molecule they need for energy. But if you process cassava properly, you can get rid of them. Linamarin makes up more than 80%, so we’ll focus on that, although lotaustralin works similarly.

There are different techniques depending on the food you’re making—a mashed potato-like dish will be different than dry flour. Some varieties of cassava have more cyanogens and need more processing. And some kind of pulverizing is usually involved. This is important because cassava cells contain both linamarin and an enzyme that breaks it down—they’re just separated in different compartments. So if you smash up the cells, the linamarin gets mixed with the enzyme and broken down. This produces hydrogen cyanide, but it vaporizes into the air.

The problem is that processing cassava properly is a lot of work. And when there are food shortages, people sometimes take shortcuts. Chronic exposures to low levels of cyanide from cassava can lead to problems with the thyroid gland and nerve damage that can cause unsteady movement. Exposure to higher levels causes a disease called Konzo, which involves permanent paralysis and sometimes death.

Scientists have tried to genetically engineer varieties of cassava without linamarin to reduce the need for processing and prevent poisoning. But they found that without linamarin, cassava requires lots of fertilizer to grow, and this makes it a less practical crop. 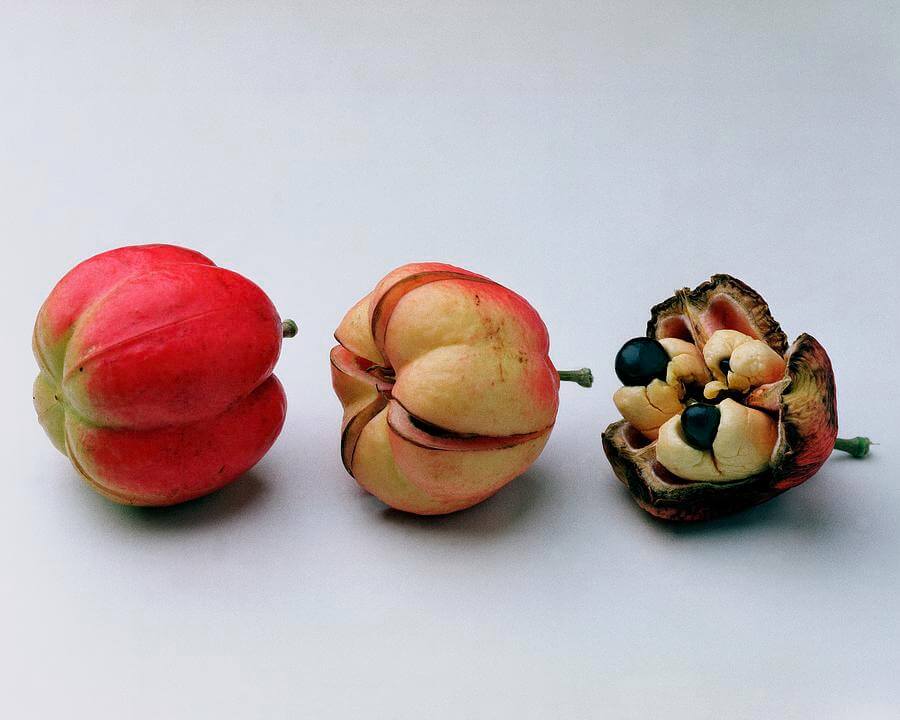 Ackee is the national fruit of Jamaica and is part of the national dish: ackee and saltfish. It’s not really sweet fruit. It has a mild flavor and creamy texture, and it’s usually cooked with savory foods like fried onions, peppers, and tomatoes.

Ripe ackee fruits don’t pose any hazard, but unripe fruits contain an amino acid derivative called hypoglycin A. Levels of this chemical drop naturally as the fruits ripen. There hasn’t been much research on why this fruit contains hypoglycin A, but it’s there, and it’s bad for you.

When ingested, hypoglycin A disrupts the body’s ability to metabolize fatty acids and amino acids. Basically, this means you’ll have trouble breaking down food into glucose, and that can cause low blood sugar or hypoglycemia. When your body breaks down hypoglycin A, it’s converted into a different chemical called methylene cyclopropyl acetic acid. This is also toxic and leads to depletion of glycogen, your sugar stores—which means; even less glucose.

Symptoms of hypoglycin A poisoning include vomiting, which is how the associated disease got its name: Jamaican vomiting sickness. And enough unripe ackee fruit can cause seizures or even death, which are much worse. Rhubarb is a hardy plant that even gardeners with a black thumb can’t kill. Its stems have a sour flavor, and they make a nice pie filling with sugar and some strawberries.

But you probably want to stay away from rhubarb leaves—they contain high levels of a chemical called oxalic acid. Lots of plants produce oxalic acid, even other veggies we eat. It binds to calcium to help them regulate mineral levels. Some plants also use it as a defense against herbivores, because oxalic acid and calcium can form needle-shaped crystals that irritate soft tissues.

Rhubarb leaves don’t have crystal needles, but they do contain enough oxalic acid to make you sick if you eat a lot of them. Oxalic acid makes it harder for your body to use calcium to do things like strengthening bones. Instead, your body tries to excrete the bound up calcium, which can glob up to form kidney stones. And kidney stones eventually have to pass through the same tube as your pee.

Eating too much oxalic acid can also lead to vomiting, diarrhea, or convulsions because your muscles and nerves need calcium to function. During World War I, food shortages in Europe led some people to eat lots of rhubarb leaves. One medical case report even describes a woman who died from it. Although doctors today speculate that there was probably something else going on besides rhubarb poisoning because it’s not that potent. So rhubarb kind of has a bad reputation because of this history.

But you’d have to eat many pounds of rhubarb leaves to get really sick, and you probably wouldn’t want to, anyway. According to people who’ve tried eating them, they’re not exactly delicious. So stick to the stems. Have you ever noticed that cashews are never sold in the shell-like walnuts or almonds? Also, they’re pretty much only pre-roasted, not completely raw—no matter what labels say. And that’s for your safety because their shells contain anacardic acid, which is closely related to urushiol.

Urushiol is the oil that causes that nasty rash from poison ivy or poison oak, and anacardic acid does the same thing. It turns out that the cashew tree is in the same plant family, and scientists believe these compounds help keep microbes out of damaged plant tissues. These chemicals don’t protect them from being eaten, though. Birds, deer, and lots of critters snack on plants like poison ivy. But humans are special. We’ve got these nifty thumbs, we overthink things, and our immune systems get freaked out by urushiol and anacardic acid.

There’s technically nothing dangerous about these compounds. They don’t harm your body. But when they’re absorbed by your skin, they’re converted to another molecule that binds to proteins on your skin cells. This makes your immune system think your skin cells are dangerous invaders, so immune cells are recruited to attack. This pointless battle results in the redness, itching, and oozing blisters known as contact dermatitis.

And your gastrointestinal tract is lined with epithelial cells, which are the same kind that makes up your skin. So if you eat improperly processed cashews, the anacardic acid will cause a similar reaction inside you, or even a rash around your anus. Pufferfish is a high-end delicacy in Japanese, Korean and Chinese cuisine. In Japan, it’s frequently served fresh and raw as sashimi. But if your chef doesn’t prepare it correctly, it could be your last meal.

In fact, chefs in Japan need years of training and a special license to prepare pufferfish, because they need to remove certain organs very carefully. Some species of pufferfish contain a neurotoxin called tetrodotoxin—especially in their liver and ovaries. Tetrodotoxin blocks the sodium channels in the cell membranes of your nerve cells. That prevents the nerves from transmitting electrical impulses. And with no nerve impulses, your muscles stop moving. You need muscles to breathe, so this means you’ll suffocate, and your heart may even stop.

Even a tiny amount of tetrodotoxin—just 1 or 2 milligrams—can kill an adult human. Which makes tetrodotoxin one of the deadliest poisons around. It’s much more potent than arsenic or cyanide, for example. But pufferfish might not even make tetrodotoxin themselves.

The science isn’t settled, but there’s evidence that the fish get the toxin from bacteria they eat with their food. Or it may even be produced by bacteria living inside of them. Scientists aren’t entirely sure why pufferfish accumulate tetrodotoxin. There’s some evidence that it might serve as a chemical signal called a pheromone, and help attract mates. Or it may help with protection since the taste of even tiny amounts of the toxin in the water seems to deter predators. But scientists need to do more research to confirm that. How to Build Your Own Diet for Faster and Better Results How Not To Eat Curd For Maximum Health Benefits